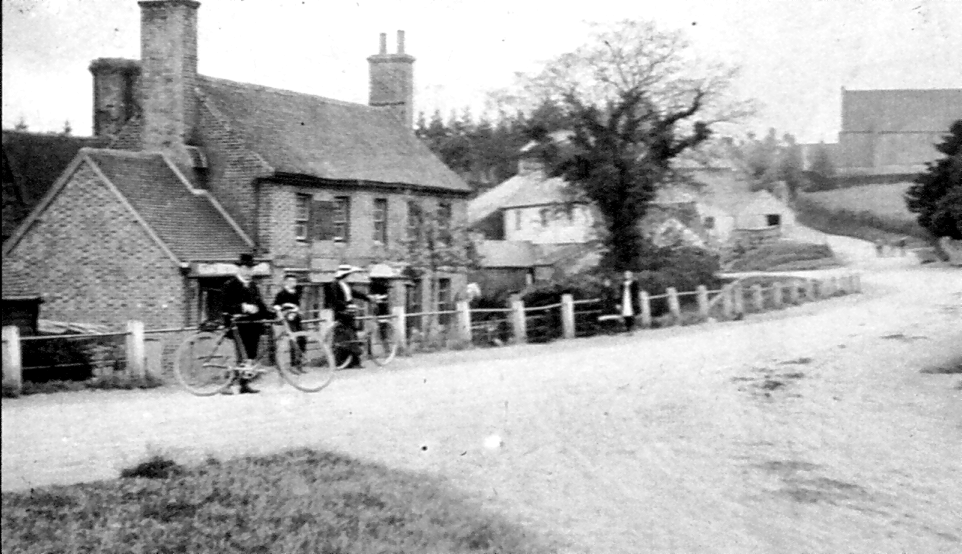 This photograph, taken before the First World War, shows the building when it was a Grocer’s and Butcher’s, at the time it was occupied by Benjamin Newnham. The single story extension on the left contained the Butcher’s shop. The Grocer’s shop was in the front part of the main building. 'The White House', is one of the oldest and most interesting houses in the parish.
This dwelling was originally a “hall house” built in c.1450 with four acres of land attached. The original house had no ceiling or upper storey. Heating was by a wood fire in the centre of the room; the smoke ascending to the roof rafters before finally escaping through small (purpose-made) apertures at each end of the roof. Today the massive roof rafters in the old part of the house are still streaked and blackened with soot from the smoke of those ancient wood fires.
Over the centuries living conditions gradually became more comfortable. First, a chimney was constructed and then, with the smoke contained, an upper storey could be inserted with a ladder or staircase access. There is a date carved on the bressummer over the hearth, rather difficult to decipher, but it appears to be 1608. Window glass replaced the old wooden shutters. The exterior of the timber-framed building was encased in brick. In the late 18th or early 19th century a new and imposing front was added making the spacious and attractive house we see today.
Giles Moore, the Rector of Horsted Keynes between the years 1655 and 1679, tells us quite a lot about this house in his Journal. It was then being used as a farmhouse and also as an Inn. The landlord and occupier was William Lin. He paid tithes to the Rector for some of the farm lands he used in Horsted Keynes Parish. The Rev. Giles Moore would ride to the Danehill inn to collect newspapers, books and other goods delivered there from London. He sometimes had a refreshing drink there before he and his horse tackled the return journey along the winding precipitous road from Danehill to Horsted Keynes. The road was typical of the majority of thoroughfares in the Sussex Weald. In a wet winter the ruts would be so sticky and deep that it was impossible for even a light wheeled vehicle to traverse the road. In summer, baked under a hot sun, the ruts in the heavy clay would be just as deep and as hard as iron.
Wealden travellers usually walked or rode a horse. The good Rector's books and goods arrived at William Lin’s house on the backs of pack-horses. Oxen, which are sturdier than horses, were extensively used by Sussex farmers to draw the plough or the farm cart. The inn at Danehill, conveniently situated beside the road from London to Brighton, seems to have been well-used and established when Giles Moore patronised it.
William Lin and his successors appear to have kept an inn or a public house going until the year 1800 when the innkeeper was one William Legge. There was a lively incident at the “Red Lion” that led to William Legge making a statement to the local Magistrate, Lord Sheffield.
A few years earlier there had been a threat of invasion by Napoleon Bonaparte and Sussex was crammed with soldiers placed there to foil a landing by the French on the coast. Supplying food and shelter for the troops was a problem. The military authorities drew up a list of inns and alehouses and calculated the number of officers, men and horses that could be billeted in each of them.
On the 16th April 1800 “William Legge of the Red Lyon Dane Hill in the Parish of Fletching on his Oath Deposes that he keeps a Small Public House at Dane Hill”. He goes on to state that “for some time past so severely oppressed by the billeting of Soldiers to the Number of 25 at a time which have been sent to him from Uckfield on a March as an adjacent place altho upwards of 8 Miles distant, in so much that not being able any longer to support such an Expence or provide for the Soldiers in such a Situation he has been obliged to decline Keeping a Publick House of which he gave Notice to the Constable on Saturday the 12th Inst.”.

He goes on to describe how a Corporal and 11 men of the 13th Regiment of Foot came to his house demanding to be billeted, when they found that it was no longer a public house they broke open the principle door of the house. Although William requested them not to make a disturbance as his wife “was lately brought to bed” the Corporal, followed by some of the men, forced their way up the stairs and “greatly terrified his sd  Wife who has since been very much indisposed in consequence thereof, repeatedly struck the sd Wm Legge pushing their bayonets against his Side Swearing they would run him thro' the Body,” they also knocked down and assaulted other men who came to assist William. The soldiers then marched William as far as Maresfield, threatening him, and others who came to his assistance, with bayonets. They forced him to give them three guineas, swearing they would keep him prisoner until he paid, before he was dismissed and allowed to return home. We do not know what was the outcome of the case, it may have been settled by Lord Sheffield

Whether William Legg or anyone else opened The Red Lion as a public-house again is not known. The new front was added to the building either just prior to or about the year 1800. It may be that from then on it was used solely as a farm house, but still retained its old name of 'The Red Lion'. Certainly the Fletching census return for 1841 shows William Browning as the owner and occupier of The Red Lion and he is described as a Farmer. William Browning died in the year 1856.
The present name of the house can be traced back to the next owner, the “Red Lion” was purchased by Henry White in 1856. White had traded as a Grocer and Draper at “The Forge” (15) and transferred his business here. In various Kelly’s Directories and Census returns he is shown as Grocer and Draper, Receiver of Post and a farmer of 20 acres. After the death of Henry White in 1872 the premises and farm were purchased by C. J. Corbett Esq. and became part of the Woodgate Estate, part of the land on Church Hill was given to the Parish by Mr Corbett for use as a Cemetery. 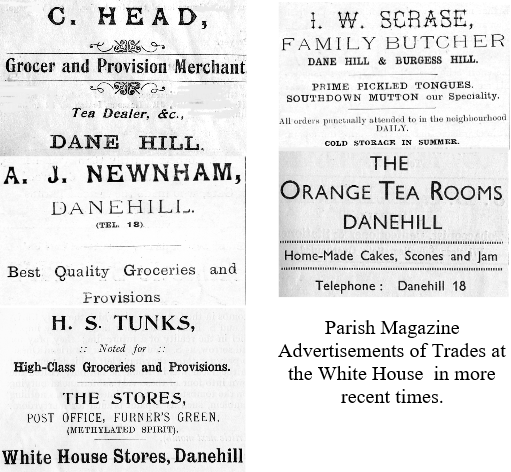 Kelly’s Directory for 1878 show Isaac Grover as Postmaster, a Mr Thompson was a grocer there before Benjamin Newnham appears by 1895.During the time of Benjamin Newnham the extension was built on the north side of the house as a butcher's shop. By 1895 Edward Hoadley was the Postmaster at Danehill Stores opposite (5). Charles Head was the next grocer, the butchers were probably still the Newnham family, by 1922 it was A.J. Newnham, a son of Benjamin who was the butcher, a year later he was also running the grocery business. It was during his time  that the Telephone Exchange was transferred from East View (33). A. J. Newnham returned to the village in 1937 to take over the Danehill Bakery.
By 1926 the businesses had separated again, Isaac W. Scrace was the butcher followed by Frederick Street who closed the business down in 1938. The grocery business was taken over by H.S. Tunks who also had the Post Office and grocery shop at Furners Green, it had closed down by 1931.
For a while the Bruce family lived in the house and operated the Telephone Exchange. The next tenants were Mr & Mrs Barnes Moss who continued to operate the Telephone Exchange until it the new automatic one was built off Freshfield Lane in 1947.
In 1931 the house gets another name with yet another colour the old “Red Lion” known as “The White House” becomes “The Orange Tea Rooms”. Mrs Barnes Moss used the old grocer’s shop to provide hospitality for a later mode of travel, it was a favourite venue for cycling clubs at weekends and continued until 1939
The butcher’s shop was the first guard room of the local Home Guard in the Second World War.
Soon after the end of that war the butcher’s and grocer’s shops were converted to form part of a separate dwelling. In 1954 the property was purchased by Mr. & Mrs J. Sales who later removed the shop front and restored the facade of the house to what was probably its original appearance.
The White House more recently on the photo below:
The earlier mediaeval part of the building is on the right of the photograph
The White House that we see now, for so long a village Inn and farmhouse, later a grocer's shop and Post Office, a butcher's, telephone exchange and a tea room, is now a private residence. 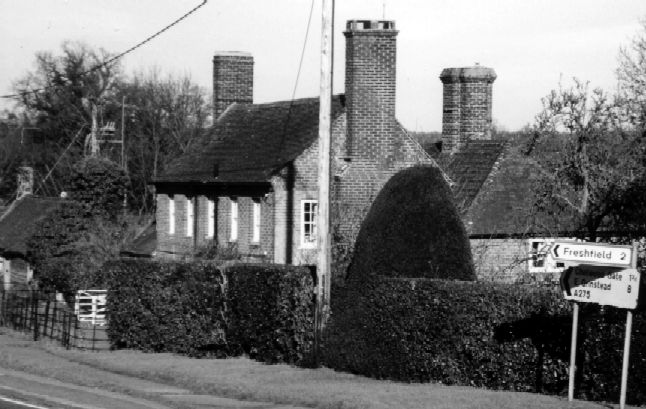