Round and About in the Parish

In 2012 Laurence Hardy let me have a copy of the “Word Picture of Danehill” which George Bennett MBE (always known as Shon, below) wrote in 1980. These details were on display at the Historical Society’s exhibition to celebrate the Queen’s 60 year reign.
Shon maintained  that in common with most Sussex villages, Danehill had been a near- complete community. In 1910 there was little need to go outside to meet everyday needs. There was a butcher’s shop at the crest of Church Hill run by the May family that employed six or more men. Localy grown meat was slaughtered on the premises. [Shon does go into detail, but I have deliberately omitted this part of his article]. Two slaughter-men were employed to deal with the animals by skinning, or in the case of pigs, scraping in hot water, and hanging the halved carcasses in large ice boxes ready for cutting up by counter staff to customer’s requirements. Sausages were ground from a large hand-wound mincer, using the animals’ washed intestines for sausage skins. Most of the meat was  delivered to the customer’s door by a team of delivery men and boys, using horse and cart or bicycle. It was a great prize for a small boy to be given a bullock’s horn to use as a very noisy trumpet as a reward for some service rendered. Straw hats and blue and white striped aprons were the standard uniform worn by all.
Then, out of the blue, Ray Smith let me have some historical information concerning the village, amongst which is a series of invoices from about 1900 onwards. One of the invoices is from Frank May who is the family butcher described above. His invoice from September 1900 advertises Prime Pickled Tongues and Southdown Mutton (no Lamb in those days). Frank May describes all the meat as home-killed and boasts ‘Families Waited on Daily’. Shon continues that there was a bakery at No. 4 Rose Cottages, previously known as Terry’s Row, which demanded long hours from Mr Cox, who started his brick oven any time from 4 a.m. onwards. While it was heating up he set about shaping the dough, prepared the night before in a large wooden bin, using his skills to make various shapes and sizes of loaf, plus a large selection of cakes and buns. The invoice from Mr Cox states “Fancy Bread and Biscuit Baker, Pastrycook and Confectioner” and dates from July 1910. Having spent the first six or so hours of his long day producing his wares, Alonso Cox then harnessed up his black mare to a very high, box-shaped two-wheeled cart, which he loaded up to deliver his loaves and goodies to all corners of the parish.

His horse and cart were housed on the site of what became the corner shop. The back part housed the horse and the front, the cart. He employed a local for a few pence to cut up a week’s supply of chaff, usually on a Sunday morning. The last invoice is from a trader in Lewes  who was supplying a Mr May in Danehill - it states they are corn and seed merchants etc supplying millers and bakers. Maybe Alonso Cox got supplies from him?

My thanks to Laurence Hardy, the Historical Society for the photo of Alonso Cox, and to Ray Smith for providing the invoices and other photos for me. Ray has also given me a copy of Kelly’s Directory from 1938 which is most useful and the Directory from that year shows that Alonso Cox is still trading. The Historical Society will display these invoices in more detail on their website.
Jill Rolfe
Back to Oral History Index 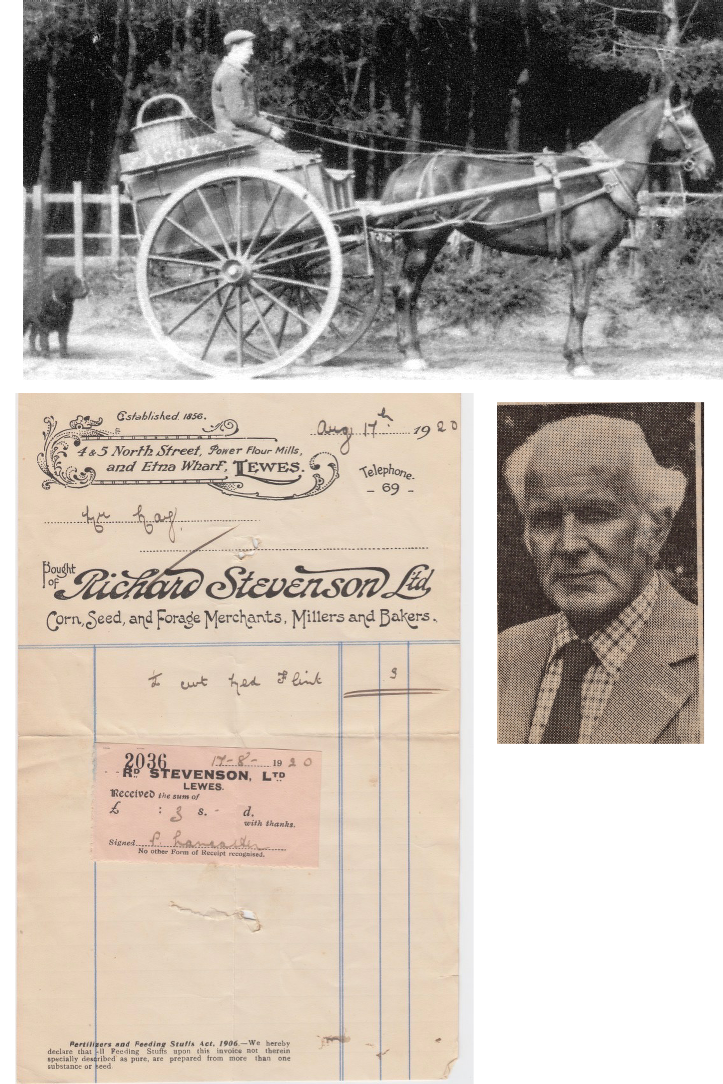